HeroVerse is excited to announce that Thi Truong, CEO of PolkaFoundry and RedKite LaunchPad, is joining the project as the Executive Advisor.

Prior to founding PolkaFoundry - a platform for creating borderless and frictionless DeFi & NFT apps, Thi Truong started out as a Software Engineer, then Solution Architect, then a Director at FPT Corporation. He later joined Kyber Network, one of Asia’s most successful blockchain projects, as a Product Manager. Beside PolkaFoundry, now Thi Truong is also running RedKite launchpad which recently has been featured in hackernoon as one of the top 6 Crypto Launchpad in 2021.

With his rich experience, Mr. Thi is a member of the advisory board and technical consultant for many blockchain projects of SotaTek, Ekoios, and many businesses in Vietnam and Japan. In addition, he is a regular guest of workshops/webinars organized by the developer community such as Grokking, Developer Circle Hanoi, Hanoi Ethereum Meetup or educational organizations such as British International School.

Recently, Thi Truong joined the HeroVerse project as an Executive Advisor. Sharing about HeroVerse, Thi Truong said that “I was impressed by the vision of the HeroVerse Development Team, which embraces the concept of players' gaming experience and open economy. Unlike most of the popular Play-to-Earn model that focuses on Earning and provides financial benefits to all players who add value by contributing to the game world, the Play-and-Earn model also focuses on player experience. That means the game is designed both for users' economy's sake and the gaming experience itself.”

As an Executive Advisor, Thi Truong incubated several blockchain projects such as Faraland, Bunicorn, Swaperry, NFTify, Kaby Arena, and StepHero. Coming to HeroVerse, he provides consulting services to our management team. He studies our goals and strategies of our business and determines what changes can be made to better serve the project and its executive team.

Thanks to the support of Thi Truong, we have successfully partnered with reputable firms in the blockchain space such as GameFi, Raptor Capital, CryptoBanter, X21, Au21 and several others. He also connected us with reliable dedicated KOLs in different countries including China, Korea, Japan, Indonesia, Philippines, Spain, and Turkey. Thus, our community is growing at a noticeable rate and attracting the attention of more potential investors and players. We hope that with the back-up of Thi Truong, HeroVerse will reach its further popularity in blockchain communities.

Heroverse is the first Match-3 Puzzle and RPG Strategy Play-and-Earn Game. Inspired by the concept of Match-3-puzzle, the HeroVerse Developer Team aims at creating a hyper-casual game that is easy to understand, simple to play, and entertaining to users. Moreover, Heroverse also focuses on prominent RPG features: exploring and looting. It is more about how the characters evolve as they interact with the narrative. Besides, HeroVerse is designed as a Play-and-Earn business model embracing both users' economy's sake and the gaming experience itself. Needless to say, HeroVerse is such a game worth waiting for this Autumn. "Time flies fast when we're having fun" is not only a quote by Albert Einstein but also a reality that HeroVerse Team has experienced so far. Looking back on September, we probably find it mind-blowing that we have reached so many milestones in just four months. The project had ups 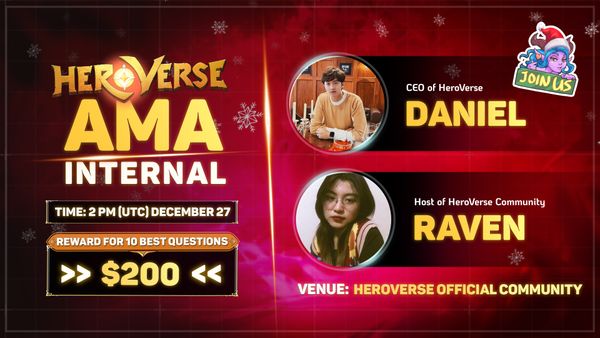 Segment 1: PROJECT RECAPDaniel: Hi everyone, nice to meet you today. Nice to meet you @HangBD (Raven's username). I'm ready! 😉 Raven: Welcome, boss! ☺️ Let's move to the first segment. Daniel: Actually, I waited a while.🤝🤝 Raven: HeroVerse has been launched for a while and received great support from the community. 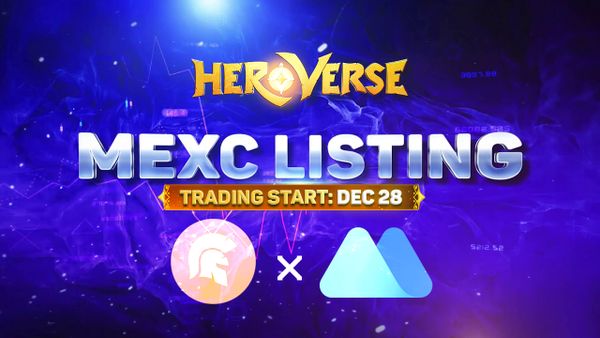 Howdy our heroes, We are thrilled to announce that our native token, $HER, is going to be listed on MEXC Global platform on December 28. A few months ago, in late September, HeroVerse, a new rising star was born with much expectation to be the next potential one. Three months